Dive site is offshore from the south end of sandy point.

Type of mooring: Boat anchor in the sand flats.

Site briefing: The depth under the boat is 40 feet on a mixed sand and coral bottom. The wall here is a straight cliff from 40 feet down to 160 and is an overhang in many places. Several big tunnels and crevices run through the wall and open out at 90 to 100feet on the side. There are plenty of deep water gorgonians, black coral trees and elephant ear sponges hanging off the side of the wall. Visibility is generally excellent and sharks are often seen. The top of the wall has heavy coral growth due to the frequent current around the end of the island. There is generally lots of fish activity. There are two smaller crevices near the boat anchorage that lead through the wall. Going west along the wall there is a small tunnel leading back to the top of the wall at about 100 feet. Beyond that is a huge cut in the wall about 60 feet across with a bottom at 110 feet. This leads into the wall and branches in two as you ascend through it back to the top of the wall.

How to dive it: Swim across the sand and down into the first crevice you see that heads toward the drop off. Take a left after you come out over the wall and swim along at 100 feet scanning out and down. Turn into the biggest cut and ascend back up to the top of the wall. Turn around and swim east to return to the boat.

We go there: usually as the first dive of the day. French Bay is generally rough and is not on the lee side of the island. Dives at the Black Forest dive site are only done when the weather and sea conditions are appropriate. 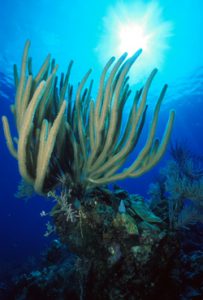