Marina Anglers from all over the world have discovered the marine wilderness of San Salvador. World record Blue Marlin, Wahoo, Dolphin, Kingfish, and Tuna cruise the deep blue waters just minutes from the Riding Rock docks. When it comes to Bahamas deep sea fishing, we encourage the philosophy of catch and release sport fishing in an effort towards conservation.

Bahamas Deep Sea fishing is offered for 1/2 and full day charters on our 28′ boat, Odyssey III.

Morning departures are usually set for 8:30 am, but the departure time is not set in stone and can be arranged to fit the needs of our anglers. Tackle, bait, and water are provided. With advanced notice, we would be happy to prepare and pack your beverages of choice and snacks or meals for your charter at an additional cost. You are welcome to bring your own beverages and food also.

*Prices are per vessel, 5 persons maximum, gratuity not included. 7.5% tax will be applied. Fly Fishing Charters available upon request. 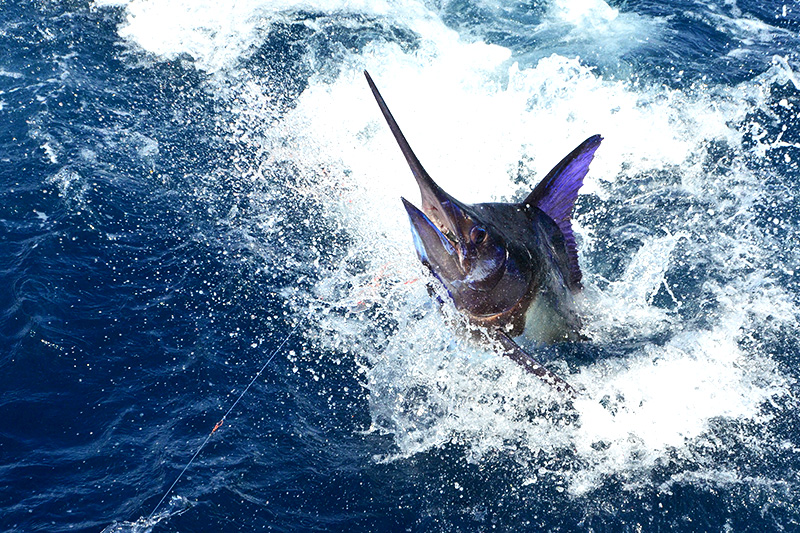 Fishing Regulations for The Bahamas

The crystal clear waters surrounding Riding Rock Resort & Marina are perfect for deep sea fishing in the Bahamas and attract more than the world’s best and brightest game fish, they also attract the world’s best anglers. In fact, our waters are so abundant yet challenging that Hemingway wrote at length about them. Plus, the Bahamas are home to over 50 fishing world records. So it’s easy to understand why fishing tournaments in the Bahamas are some of the most competitive and exciting to be apart of or behold. Pros to first-timers make their way down every year to try and win one of our numerous tournaments by landing the biggest fish or most catches. From wahoo to billfish, our fishing tournaments have something to offer anyone interested in testing their fishing skills. Got what it takes to land the big one? Come on down and find out.

George Poveromo, host of ESPN2’s World of Saltwater Fishing heads back to the beautiful Bahamas Island of San Salvador, where during his last and only visit prior to this trip he scored his personal best wahoo to date – a 143-pound, three-ounce monster! This time he’s back in late April 09 and targeting yellowfin tuna and dolphin aboard Captain Trey Rhyne’s “Low Profile”. The local waters come alive with tuna and big dolphin during the spring, and George and Trey find plenty of cooperative fish. Keeping the fish biting requires the team to troll a mix of natural baits, pure artificials, and lure/bait combos, and frequently adjust the size of these baits, their positioning and trolling speeds; Once hooked up, it takes muscle and speed to keep their catches from being devoured by the sharks! The twist here, ironically, is that while trolling back to the Riding Rock Marina after a successful trip, George scores another gargantuan wahoo – a fish tipping the scale at 113-pounds, two-ounces!

The Bahamas and Riding Rock Resort are open and receiving guests. We are excited to reconnect with our repeat guests and looking forward to sharing our island hospitality with new guests.

For your comfort and safety, the law requires that you present upon arrival a negative COVID-19 RT-PCR swab test within 5 days of arrival and wear a face mask. The pandemic has created for us a new norm, but our charm remains the same as before.

So, come on over and share in the experience of island tranquility, pristine underwater life, and world-class fishing!