The Bahamas have long been known for their beautiful beaches and pristine water clarity, especially that of San Salvador island. This has made the Bahamas a sanctuary for sea life, and a destination for marine enthusiasts to have an amazing experience. Bahamas scuba diving is a great way visitors can observe some of the ocean’s most beautiful creatures that roam in the turquoise waters closer to shore, and anglers can test their luck against notorious game fish that swim not so far offshore. 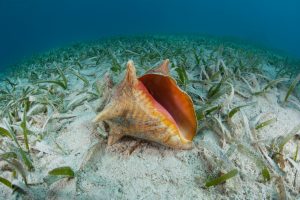 You don’t have to roam far from San Salvador to find beautiful sea life. There is plenty of aquatic life within just 15 miles of shore. One of the most sacred to the waters of the Bahamas is the queen conch. This tropical marine mollusk can grow up to a foot long, weigh up to five pounds, and sports a beautiful hard shell to protect it from predators. You can find these creatures at just about any of the shallow Bahamas dive sites. Since it’s a valuable delicacy above and below water, the conch population suffers from over-fishing and could become endangered. This is due to the snail’s long stage of growth before it can reproduce, which can take up to five years. Being an authentic Bahamian meal, it’s something to try in a local restaurant, but if you’re in the water, do your best to let them grow in peace so they may be seen by future generations to come.

Shiny, quick, and maybe a bit scary looking, the great barracuda calls the Bahamian waters home. The beautiful great barracuda spends its time patrolling the reefs of the Bahamas for small prey such as snapper, jacks, and small groupers. That being said, divers typically don’t have to worry about barracuda being aggressive towards them. If you’re fishing for barracuda, prepare yourself for a fast and fierce fight. With an average speed of 27 mph and a max length of 10ft long, this fish will give even seasoned anglers a strike and fight that they will not forget. Residing inshore and offshore, there is no shortage of barracuda sightings around San Salvador.

If you spend enough time on or in the water, you might be lucky enough to encounter one of the most majestic creatures that roams the Bahamas: the giant manta ray. These beautiful creatures are known to come in close to the reefs to feed, making them a great site for divers. The giant manta ray lives up to its name, with an average wingspan of 23 feet and weighing in around 5,000 pounds! Some may be frightened by the size alone, but the rays are very docile creatures and are no threat to humans. If you do see one roaming the waters around you, make sure to give it proper distance. They are covered in a mucous film that keeps them protected from harmful bacteria and if touched, that film falls off and exposes the ray.

If you choose to venture out a bit further from shore, you’ll find yourself in a deep sea paradise. If you dive out in these waters, you may be surrounded by some of the ocean’s biggest and most stunning fish, such as tuna and sharks. If you are an angler looking to hook into some of the most notorious game fish in the world, then you’ll need a Bahamas fishing charter.

Tuna have always been a staple of Bahamas deep sea fishing and the Bahamas is home to a few different species. Blackfin, bluefin and yellowfin tuna all roam the waters around San Salvador. The blackfin is the smallest of tuna species in the Bahamas, still weighing in at an average of 50lbs and measured out to over 3ft! These fish tend to come in abundance during the summers, so wait for the warmth to see these beautiful fish to run in large numbers. 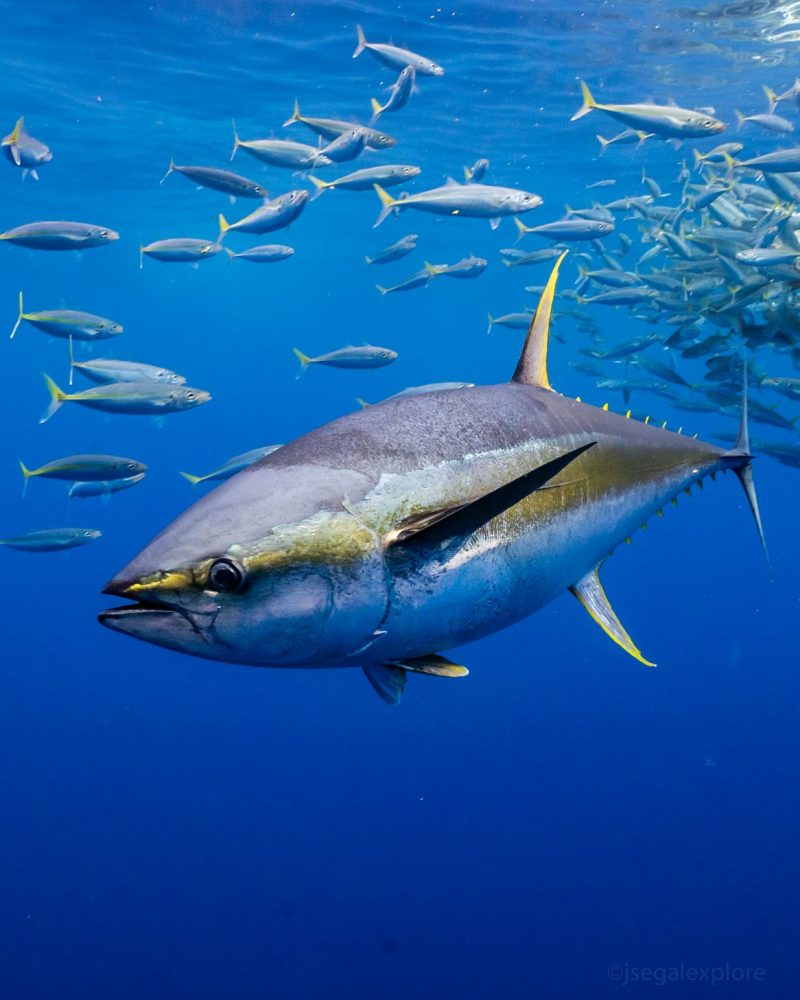 The bluefin tuna is the largest of all tuna species, weighing in at over 500lbs and can stretch past 6ft long! Aside from the sheer size of these monstrous fish, they are also known for their speed, clocking in at over 40 mph. These fish are a treat to see as they are a more rare than their tuna counterparts. Being the only warm-blooded fish of its kind, they are known to have a voracious appetite to keep up their body temperature. This gives anglers a better chance of hooking one if they have the right bait.

The yellowfin tuna is the most common species that roams Bahamian waters. While typically not as large as the bluefins, yellowfins are known for their strength and speed that can give any angler a run for their money. If you are looking to get close to a yellowfin, look for large flocks of birds at the surface. The tuna will push prey towards the surface and birds will flock down to snag the smaller fish, which is a site to see in itself.

Sharks are often known for their fearsome characteristics, but what people tend to forget is what amazing creatures they really are. Luckily, there is a healthy population of a few different species of shark that inhabit the waters of the Bahamas. The species that typically run through the area are tiger, Caribbean reef, great hammerheads and even whale sharks. If you are very lucky, you may get a glimpse of the scalloped hammerhead shark, which is the rarest species of hammerhead. These beautiful creatures migrate through the Bahamas and make for a once in a lifetime experience for divers at the right place and time. Of course with sharks, be cautious and aware of your surroundings while in the water. Fishing for sharks is not encouraged in the Bahamian waters, so if you do hook into one, make sure that it returns safely to its home.

Divers may not be as keen to get close to these fish, but it’s every angler’s dream. If you are fishing in the Bahamas, the Marlin is the fish to chase, and since  San Salvador island is a bit too far for most Florida anglers to venture to, there is a better chance of having your dream billfish fight. Known to measure up to 12 ft long and weigh over 1,000lbs, these fish are giants but still manage to be one of the fastest fish of the Bahamas, reaching speeds of almost 70 mph! Divers do not often have the chance to get in the water with these giants and when they do, it is best to keep a safe distance as these fish can be fast and unpredictable.

Charter the Bahamas with Riding Rock 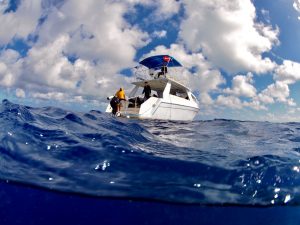 San Salvador, Bahamas and is home to many beautiful creatures and luckily, Riding Rock Resort & Marina provides access to the best two ways to get close to them. Contact us and book one of our dive vacation packages or one of our dream Bahamas deep sea fishing charters.

The Bahamas and Riding Rock Resort are open and receiving guests. We are excited to reconnect with our repeat guests and looking forward to sharing our island hospitality with new guests.

For your comfort and safety, the law requires that you present upon arrival a negative COVID-19 RT-PCR swab test within 5 days of arrival and wear a face mask. The pandemic has created for us a new norm, but our charm remains the same as before.

So, come on over and share in the experience of island tranquility, pristine underwater life, and world-class fishing!